Following reunification of the two German states to form a single republic, the five federal states of Saxony-Anhalt, Brandenburg, Lower Saxony, Mecklenburg-Western Pomerania and Schleswig-Holstein agreed to establish a common, large scale nature protection area along the course of the Elbe. Its aim was to preserve the largely intact, near-natural valley of the Middle Elbe in its entirety.

In 1997, the UNESCO accorded the ‘Elbe River Landscape’ formal recognition as a biosphere reserve. It is representative of the ecosystem of a major Central European river’s intermediate section. Its designation as a biosphere reserve reflects the singularity, quality and degree of development potential of this riverscape. This is the case not only in respect of the biological diversity, but also of its model character for regional development.

The UNESCO Biosphere Reserve ‘Elbe River Landscape’ has a total area of 2,823 km² and stretches along 400 kilometres of the course of the river Elbe. The Lower Saxonian section comprises about 15 percent of the total, i.e. 567 km² along 95 river kilometres.

Each of the participating Federal States administrates its own section of the reserve on the basis of an act of its own parliament. The various administrative bodies which have been inaugurated as a result work together on common development aims for the region. 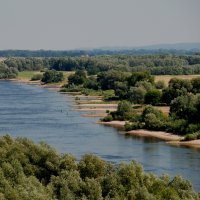