The Lower Saxonian Elbe Valley Biosphere Reserve follows the course of the river Elbe from the state border near Schnackenburg in the south-east (Elbe-km 472.5) to Hohnstorf (not far from Hamburg) in the north-west (Elbe-km 569). The terrain of the reserve ranges from 109 m to 5 m above sea level. The present shape of the Elbe valley was formed by the meltwater flows resulting from the last ice age as they sought a way through the moraines of previous ice ages to the North Sea. Later, about 12,000 years ago, the valley sands were transformed into sand fields and dunes along the river course. These characteristic landscape features reach heights of up to 36 m.

Over thousands of years the powerful river changed its course many times. New meanders formed, whilst older ones were cut off from the main flow and became oxbow lakes. The deposits of alluvial clay in the valley are the result of Neolithic forest clearance, agriculture and further clearance in medieval times. The process continues to this day, with large quantities of sand and mud being shifted during high water periods, whilst in winter ice floes grind away the present river bed and banks.

The lowlands immediately adjacent to the river are still subject to frequent flooding. These watermeadows are bordered on both sides by extensive stretches of slightly higher land which together form the original valley. These days they are protected from flooding by a system of dykes. Various tributaries of the Elbe cut through the low lying country, which is also characterized here and there by ancient moraine remnants which the locals refer to as ‘Geestinseln’ – islands of geest deposits. One such old moraine hill lies between Hitzacker and Bleckede, rising to 86 m in height. Parts of it lie close to the present day river.

The climate of the biosphere reserve represents the transition between the subatlantic zone to the west and the subcontinental zone to the east.

Its status as a landscape form is described by the term ‘Lowlands of the Lower Middle Elbe’. This area is further subdivided into the subunit ‘Elbe valley between Lenzen und Boizenburg’ (56%). The ‘Wittenberger Stromland’ (‘Wittenberg riverine landscape’) and the ‘Lauenburger Elbtal’ (‘Lauenburg Elbe Valley’) account for a further 10% each. Finally, the western edge of the reserve consists of parts of the ‘Lüchower Niederung’ (‘Lüchow Lowlands’) and the ‘Ostheide’ (‘Eastern Heathland’). 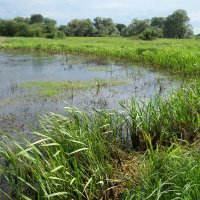 The lowlands immediately adjacent to the river are still subject to frequent flooding.