At the end of the 19th century the importance of the Elbe as a major trunk route for freight transport began to increase significantly. The standard barges navigating the Elbe were 44 m in length, about 5 m wide and they had a draught of 1.175 m.

To improve navigability, the navigable channel was fixed through the construction of groynes. Notwithstanding these measures, it is still necessary to rechart the channel regularly because the masses of sand transported by the river lead to unpredictable changes in its passage. Furthermore, the navigability remains very dependent on climatic conditions, and for long periods of the year the low levels of the water mean that it cannot be used by commercial traffic. To date, the measures which would be necessary to ensure that larger barges with draughts up to 1.40 m can use the river throughout the year have not been implemented because of the fact that they would definitely involve major incursions on the riverine ecosystem.

In very dry years the Elbe is impassable for weeks at a time. This unreliability has led to a relative decline in freight traffic on the Elbe between Geesthacht and Magdeburg. As an alternative, the Elbe-Seitenkanal (Elbe Lateral Canal) can be used, which is now connected with the Elbe-Havel Canal via a waterway intersection at Hohenwarte.

The responsible waterways authority (Wasser- und Schifffahrtsdirektion Ost) reports that between 2001 and 2007 freight totals of 8.3 to 10.1 million tonnes per year passed through the lock at Geesthacht. Of these, however, only about three to four percent were transported on the Elbe between Magdeburg and Lauenburg, whereas 93 percent of the freight was carried on the Elbe-Seitenkanal.

Complementing the freight traffic, there are large numbers of recreational boats of various sizes on the Elbe. Landing stages and marinas can be found in, amongst other places, Lauenburg, Boizenburg, Bleckede, Hitzacker, Dömitz and Schnackenburg. 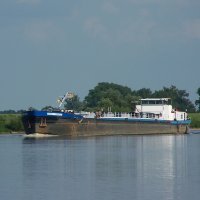 Only about three to four percent of the annual freight passed through the lock at Geesthacht were transported on the Elbe between Magdeburg and Lauenburg.