Fishing in the Elbe

For time immemorial, the fish of the Elbe have been used as a source of food. At their peak, professional fishing operations for migratory fish such as salmon (Salmo salar), whitefish (Coregonus maraena), sturgeon (Acipenser oxyrinchus), sea trout (Salmo trutta trutta), allis shad (Alosa alosa), burbot (Lota lota) and river lamprey (Lampetra fluviatilis) produced catches of 100 kg per hectare. In 1926, just 24 kilometres of the river upstream and downstream of Bleckede provided for the livelihoods of 14 full time fishermen.

The construction of the groynes to regulate the flow of water in the Elbe led to the loss of large areas of shallow and calm waters which had previously served as habitats for fish. From 1900 onwards the fish stocks went down rapidly, mainly on account of the increasing pollution with industrial waste water. Correspondingly, the quantity of fish caught was reduced to 15 to 20 kg per hectare in 1950.

Since 1990 pollution levels have gone down again and the water quality improved significantly, allowing the fish stocks to recover considerably.

One of the aims formulated in the accreditation process for the biosphere reserve concerns the restoration of the Elbe as an ecologically sound river. This includes the rehabilitation of the habitats required by piscine fauna, especially the migratory species.

At the same time, the sustainable use of the fish stocks and the promotion of fishing as a livelihood are also seen as important goals. At present, there are three full-time fishing enterprises operating in the biosphere reserve as well as 20 fishermen working part-time and 20 angling clubs.

In 2001, an initiative was established with the aim of coordinating professional and amateur fishing and improving the cooperation between the fisheries and potential gastronomic and touristic outlets. 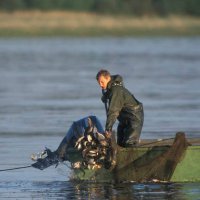 Since 1990 pollution levels have gone down again and the water quality improved significantly, allowing the fish stocks to recover considerably.