The Elbe, as well as its tributaries such as the Jeetzel, have been used as an important means of transporting people and goods for hundreds of years.

Beginning in the 19th century, the railway network became increasingly important until well into the 20th century. This can be seen in the history of the rail connection between Lüchow and Salzwedel, which was extended to Dannenberg in 1911, and discontinued in 1970.

The Bleckede – Lüneburg line has been in existence since 1904, and in 1943 the 6 kilometres to Alt Garge were added. However, passenger services were discontinued in 1977.

The connection from Wittenberge via Lenzen and Dömitz to Lüneburg was served from 1874 until 1947, whereby the destruction of the Elbe bridge at Dömitz at the end of the Second World War in 1945 heralded the demise of this line as well. A narrow gauge railway ran from Neuhaus to Brahlstorf from 1912 until 1972. Today, the route has been converted into a popular cycleway.

As late as the early twentieth century, the road network in the Elbe lowlands was very underdeveloped. Such roads as existed were mainly unmetalled sand or grass tracks or causeways. Military roads dating from the Middle Ages became trunk travelling roads and then mail routes for the emerging postal services. Names such as ‘Alter Postweg’ (‘Old Mail Route’), ‘Heerweg’ (‘Military Highway’) and ‘Bohldamm’ (causeway constructed with timbers) still testify to these historical beginnings.

Only in 1933 were major road construction projects commenced. These include the road bridge near Dömitz which was built in 1936, but destroyed in 1945 by Allied bombers. As part of the Bundesstrasse 191 (Federal Highway 191), this Elbe crossing was replaced in 1992 following the reunification of the two German states.

With the increase in road traffic in the mid-50s which accompanied Germany’s economic recovery, the road network underwent a renewed expansion at the expense of the railway infrastructure, leading to many branch lines in the region being abandoned. 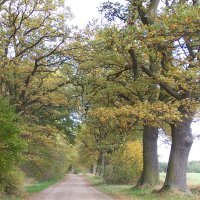 As late as the early twentieth century, roads as existed were mainly unmetalled sand or grass tracks or causeways.