The history of the biosphere reserve

In 1997, the UNESCO accorded the ‘Elbe River Landscape’, stretching from the Saxonian border to a point downstream of Lauenburg, formal recognition as a biosphere reserve. On the basis of this internationally accepted status, the Parliament of Lower Saxony expressed its intention, in November 1999, to inaugurate a biosphere reserve in the Elbe valley according to the requirements of the Federal Nature Conservation Act.

The Lower Saxonian Ministry for the Environment and Climate Protection thereupon clarified the technical and legal issues involved and developed a concept for the establishment of the reserve and definition of its internal boundaries and the regulations necessary for its administration.

A working group was formed with representatives from the administrative districts of Lüneburg and Lüchow-Dannenberg, the State Environment Ministry, the regional administration in Lüneburg, the Lower Saxony Water Management, Coastal Defence and Nature Conservation Agency and the Alfred Toepfer Academy for Nature Conservation. The working group pooled its knowledge from many different spheres to ensure that the project was conducted as competently as possible. In addition, the local communities which were to be affected, chambers of industry, trade, agriculture and commerce, local cultural and conservation associations, wildlife management experts, state-wide nature conservation organisations and all the state ministries concerned met together in the course of many conferences and hearings and were thus able to bring their needs and experience to bear in shaping this major conservation project.

The process continued for three years and culminated in the passing – by unanimous vote – of an Act of the State Parliament in its plenary session of 23rd October 2002, the 'Gesetz über das Biosphärenreservat "Niedersächsische Elbtalaue" (NElbtBRG)', i.e. the Lower Saxonian Elbe Valley Biosphere Reserve Act. This was the first law of its kind to be passed in Germany on the basis of the Federal Nature Conservation Act, and thus the biosphere reserve is also the first of its kind. Furthermore, the State Parliament passed a resolution, also unanimously, entitled ‘Lower Saxonian Elbe Valley Biosphere Reserve – creating the future together’.

The Biosphere Reserve Plan was completed in 2009. This planning instrument forms the starting point for future development of the region and is an important working basis for the communities and administrative bodies in the region. 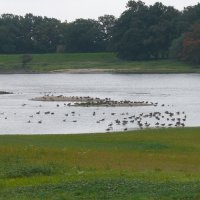 In 1997, the UNESCO accorded the 'Elbe River Landscape' formal recognition as a biosphere reserve.