The history of a cultural Landscape

Only as late as the 13th and 14th centuries was the Elbe valley transformed from an essentially natural landscape to one predominantly influenced by human activities. The local populations began to undertake major efforts to protect their settlements and fields by building dykes. Following the completion of the system of dykes in the 16th century, today’s landscape is the result of a very profound metamorphosis of the landscape. Only with parts of the valley floor being protected from flooding was it possible to establish a permanent infrastructure for living and working, including arable farming. The conditions had arrived which have led to the present cultural landscape.

The extensive woods on the fertile marsh soils were cleared for arable and grazing land. Many traces of the forms of land usage which then developed can still be seen today: Gnarled old oak trees on the meadows and in the villages, typically pollarded willows, long rows of fruit trees lining the roads as well as large numbers of hedges and avenues of trees.

Searching for such signs of man’s interaction with nature in the Elbe valley makes a fascinating occupation for professional and amateur historians and archaeologists alike. 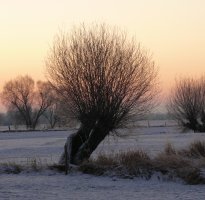 Traces of the forms of land usage: pollarded willows