From a geological point of view, the biosphere reserve contains the most significant areas of accumulated wind-borne sand and non-maritime dunes in Lower Saxony. They were formed along the course of the Elbe about 12,000 years ago following the last Ice Age. The largest such area is to be found in Amt Neuhaus, in the vicinity of the Carrenzien Forest.

In earlier days, the dunes were mobile. In the nineteenth century, however, they were afforested and on the whole they are now covered with lichen-rich pinewoods. There are only a few small areas of ‘wandering’ sand left.

The animals and plants which use the dunes as their habitat face considerable challenges. Only a few plant species can cope with the dryness, occasional extreme heat and the lack of nutrients. These include the Morison’s spurry (Spergula morisonii), an insignificant little plant, the seeds of which ripen quickly in spring, after which it withers away. Many parts are enriched by ecologically valuable sandy nutrient-poor grasslands. One of the pioneer plants which appears first on open stretches of sand is the grey clubawn grass (Corynephorus canescens). And growing between the low blue-grey clumps of grey clubawn grass one can generally find sand sedge. Sand sedge (Carex arenaria) spreads by sending out long offshoots, so the plants have the appearance of being lined up along strings. When they have established themselves, these plants provide shelter which allows other species such as mosses and lichens to gain a foothold.

For a number of wild bee species the dunes provide suitable places to dig brood chambers for their larvae. A common sight, often at the base of a clump of grey clubawn grass or underneath pine roots, are the pits dug by ant-lions (Myrmeleonidae) to catch their prey. Lower Saxony’s woodlark population (Lullula arborea) has a local peak in this dry landscape of dunes. They also provide a refuge for endangered grasshopper species such as the blue-winged grasshopper (Oedipoda caerulescens), the grey bush cricket (Platycleis albopunctata) and the heath grasshopper (Chorthippus vagans).

In a few places the wind has produced depressions in the dunes which have turned into miniature moor landscapes. They are very varied in their characteristics, being described variously as perfused bogs, transitional bogs or raised bogs. In the past they have been used as a source of peat for fuel on a small scale. With precipitation levels slowly receding, there are signs of these areas drying up in some parts. 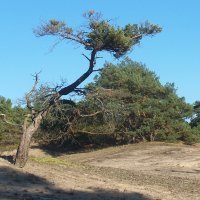