The Elbe Valley from September to November

In rainy years, the pinewoods on the sandy dunes along the Elbe produce large numbers of fungi. Bay boletes (Boletus badius), ceps (Boletus edulis), chanterelles (Cantharellus cibarius) and yellow knights (Tricholoma equestre) find the right conditions on the poor soils to develop their fruit bodies. And everywhere the old fruit trees lining the roads bow down under the weight of the ripening harvest.

The first of the bean geese (Anser fabalis) arrive on the fields of the Elbe marshes in October after the harvest has been brought in. From time to time groups of cranes (Grus grus) can also be seen in the Elbe valley, whereby their preference is for harvested maize fields. They find their sleeping quarters in the shallow waters between the groynes and sandbanks of the Elbe or in extensive watermeadows.

The number of northern geese increases steadily throughout the autumn. The first bean geese (Anser fabalis) are followed a little later by groups of white-fronted geese (Anser albifrons) and then, in November, the whooper swans (Cygnus cygnus). During the day, they can be found on the arable fields and grasslands, and at night time they often gather on the groyne fields and on the blind arms of the Elbe near Dömitz, Grippel, Wehningen, Wilkenstorf, Pommau, Neu Garge and Radegast or on the river Sude near Preten. 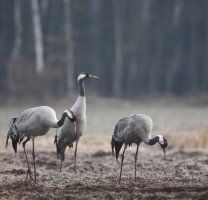 From time to time groups of cranes can be seen in the Elbe valley.