Between Hitzacker and Alt Garge the moraine landscape known as geest which was left by the Saale ice age and the present course of the Elbe are in close proximity. The terrain drops sharply around 35 m, with an interruption near Katemin where a stream, the Kateminer Mühlenbach, makes its way towards the Elbe. Other brooks have cut deep ravines into the geest edge, and in some places at the bottom spring water appears. The upper terrain of the geest is forested, and at intervals along the dividing line beechwoods with shrubless, low undergrowth have developed.

A few kilometres further upstream two geest islands rise up from the valley floor. One of them, near Langendorf, is quite large in extent and it reaches a height of about 25 m above its surroundings. This makes it less conspicuous than the Höhbeck geest island, which is smaller but much higher, rising 60 m higher than the lowlands around it. These ‘islands’ are the remains of a base moraine from the Ice Age which have withstood the erosive effects of the Elbe.

The soils of the geest islands consist of sand, gravel and boulder clay. On the northern edge of the Höhbeck there are steep, strongly structured slopes. Spring water emerges, for instance giving rise to the stream called the Thalmühlbach, which enters the Elbe after just one kilometre. The south-western slope is less steep, its contours having been softened by deposits of dune sand. On top, the Höhbeck is characterized by a mixture of pinewoods, dry fallow areas and arable land.

The great variety of features and landscape structures on the lowlands north of the Höhbeck, together with the wooded slopes, forms valuable biotope complexes and habitat configurations for many rare and endangered animal species. These include the fire-bellied toad (Bombina bombina), the European tree frog (Hyla arborea), the moor frog (Rana arvalis) and the great crested newt (Triturus christatus), many insect species as well as bird species such as the white-tailed eagle (Haliaeetus albicilla), the black kite (Milvus migrans), red kite (Milvus milvus), common sandpiper (Actitis hypoleucos) and kingfisher (Alcedo atthis). 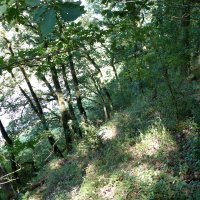 On the northern edge of the Höhbeck there are steep slopes.