The most important legal foundation for achieving the goal of preserving and developing the Elbe lowlands and their characteristic habitats to the mutual benefit of the inhabitants and the environment is provided by the 'Gesetz über das Biosphärenreservat "Niedersächsische Elbtalaue" (NElbtBRG)', i.e. the Lower Saxonian Elbe Valley Biosphere Reserve Act, which was published on 14th November 2002 (see Lower Saxonian Legal Register Nds. GVBl. page 426) and lately changed on 19th February 2010 (see Lower Saxonian Legal Register Nds. GVBl. page 104). This act complements the German Federal Nature Conservation Act or makes deviating arrangements according to Art. 72 of the German Basic Law.

The regulations governing zone C areas are largely laid down in the biosphere reserve act. However, there is scope for the designation of further leisure and tourism areas by mutual agreement between the biosphere administration and the respective local communities. Such areas include recreation areas, barbeque areas, fishing stretches, landing facilities for waterborne vehicles and access routes.

In zones A and B it is the responsibility of the district administration authorities for Lüneburg and Lüchow-Dannenberg to exercise appropriate influence on the preservation and development of the biosphere reserve by means of additional regulatory measures.

In addition, a range of laws, directives, programmes and agreements at state, national and international levels apply to the biosphere reserve. The chief of these are as follows:

The directives contained in this act deal with basic regulations and aims of nature conservation and landscape management. They are to be applied directly in the biosphere reserve.

This Act contains regulations which, similar to the Biosphere Reserve Act, complement the Federal Nature Conservation Act or make deviating arrangements according to Article 72 of the German Basic Law.

Since 1983, parts of the biosphere reserve have been designated as SPA. The legal implementation of this directive is provided for within the scope of the Federal Nature Conservation Act.

This Directive has been designed with the purpose of establishing a unified, Europe-wide network of special areas of conservation, to achieve a minimum degree of protection in these areas and to ensure that measures proposed in these areas are first subjected to environmental impact assessment in respect of the protection aims. The State of Lower Saxony has recommended to the Federal Government the adoption of amongst others parts of the biosphere reserve as SAC. The European Directive is implemented within the scope of Federal nature conservation law.

The 'Elbe River Landscape’ was accorded the status of biosphere reserve in 1997. 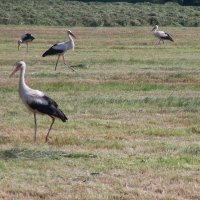 Since 1983, parts of the biosphere reserve have been designated as Special Protection Area.